Today the Minister with Responsibility for Defence, Paul Kehoe T.D. confirmed the allocation of an additional €1 million to his Department’s Civil Defence Budget.

The additional €1 million was secured from the Dormant Accounts Fund. The Minister expressed his appreciation to his Ministerial colleague, Minister Canney who recently announced €62 million in Government funding for rural regeneration and development projects across the country.

Minister Kehoe said “the awarding of this additional funding is testament to the high regard Civil Defence is held both within Government and by the wider public”.

The monies will be used in 2020 to further improve and update the Civil Defence vehicle fleet.

It builds on the additional €500,000 allocated by the Dormant Accounts Fund in early 2019 to Civil Defence. That funding was used to purchase 16 new four wheel drive vehicles.

The Minister said “the allocation is an important acknowledgement of the work of Civil Defence units and their ongoing commitment. Key within those units, is the 3,500 volunteers who give generously of their time and talents to serve their communities”.

The role of Civil Defence is set down within the 2015 Government White Paper on Defence and is to “support the Principal Response Agencies in a variety of emergency and non-emergency situations”. In that context and in concluding, the Minister stated “this additional investment will support the organisation and its people in fulfilling that role”. 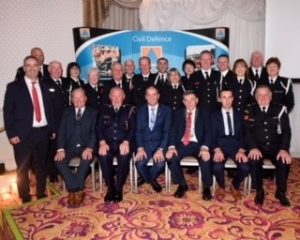