At the ceremony in the Civil Defence Phoenix Training Centre in the Phoenix Park, the Minister stated; “Civil Defence has never been afraid to change and has continued to thrive with the major transformations that have taken place down through the years. That success is very much to the credit of everybody assembled here today and in particular to the volunteers who give of their time and expertise”.

The 20 Civil Defence drones located throughout the country and in each Major Emergency Management (MEM) region will assist Civil Defence in fulfilling its role as set out in the 2015 Government White Paper on Defence; that is to support the Principal Response Agencies. In particular, drones have assisted Civil Defence volunteers when An Garda Siochána has requested support from Civil Defence especially in the case of a missing person.

The Minister concluded by congratulating the 43 volunteers on successfully completing the drone pilot training programme and thanked them personally and on behalf of the Government for their commitment and dedication in serving their communities.

Since 2014 Civil Defence has been at the leading edge of developing drone technology to assist in the search for missing persons in Ireland and has contributed to international papers on the subject.

Civil Defence are on call 24/7 to deliver an aerial search capability to An Garda Siochána to assist them in their role to find missing persons. This service has been enhanced in the last 12 months to carry thermal imaging camera’s so as to carry out effective searches at night time for vulnerable missing persons.

The service is also used to assist the County Fire and Rescue Services to carry out rapid assessment of wild land fires in inaccessible areas. Civil Defence has invested considerably in the area of drones and training in recent years. With these new pilots, there are now 60 trained pilots in 20 operational units throughout the State. Each Major Emergency Management Region (MEM) has access to multiple craft and crews with specialist equipment held in reserve at a National Level. 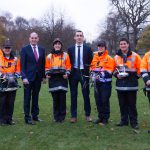 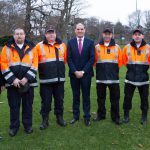 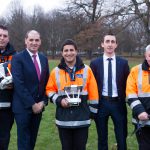