Mayo Civil Defence held a search and rescue exercise at Lough Lannagh, Castlebar on Sunday 18th August 2019. The exercise involved all disciplines, including boats, drones, communications, ground search, ambulance and first aid. The scenario involved a supposed report from AFS about five young people who had attended a party the previous night in Castlebar and failed to return home. Volunteers reported to Castlebar base at 9.30 and were briefed on the scenario. They then carried out all pre-duty checks and risk assessments before deployment to the scene.

On arrival, Comms. was set up and ground search teams deployed. The Boat Search Team commenced operations and the Drone Team began an air search of the vicinity while the Ambulance and First Aid Teams stood by to attend where required.

When all casualties had been located, recovered and treated appropriately, the volunteers retired to Lough Lannagh for lunch, after which there was an exercise and demonstration in the extrication of RTA casualties from a car. Following that the volunteers went indoors for some very enjoyable (and hilarious) team building exercises involving jigsaws, balls of twine and blindfolds!

The exercise ended with a discussion on the days events, a talk by Commander Fran Power on Critical Incident Stress Management and the Mayo CDO Rose Doherty thanked everyone for their participation and input.

All agreed that it was a very enjoyable day with a lot of valuable lessons learned and the more inexperienced volunteers were particularly glad to see how the theory that they had been learning, worked in real life situations and how the various teams interacted. 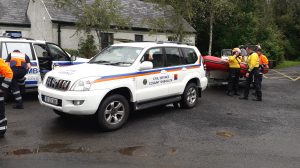 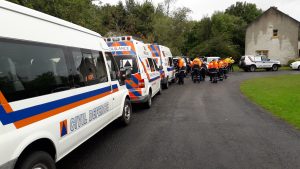 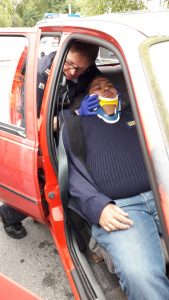 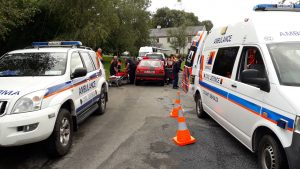