On the 5th of June 2022 little did we know that it was the day they were going to be instrumental in saving a person’s life.

We approach all duties the same way.  We ask ourselves ‘what are the likely medical emergencies we could encounter today’ and we have a quick discussion as to what we will do in the event of….

On that morning, one of the things we discussed was our plan if we were called to a cardiac event.

The morning was like so many others, the preparation for a major duty, the Cork City Marathon, over 10,000 runners of different abilities, levels of training, shapes and sizes, running different events such as half marathon,  and relay through the streets of Cork.

On average, approximately 60 patients present during Marathon day depending on the conditions, the conditions on this day were wet and rain was forecast for the day.

Of course, there is a huge amount of work that goes into preparing for this event, special training of all the voluntary organisations by our own Dr. Jason van der Velde and our Civil Defence volunteers who make sure our equipment and vehicles are ready for the duty, not to mention the personal hours put in by our Instructors to make us competent pre-hospital medics.

The Marathon cannot function without the help of the 110 medics that make up the voluntary response on Marathon day – Civil Defence, St Johns Ambulance Brigade, Red Cross and Order of Malta who provide cover on the mobile resources as well as the Communication team who co-ordinate the responses from the Co-Ordination Centre and track the ambulances and RRV’s as they respond to calls along the marathon route.

This year the Communications Team, consisting of volunteers from Civil Defence, Red Cross and St. John Ambulance brigade had an additional element where they could physically see each ambulance on a computer screen, which helped with quickly identifying which ambulance to respond to a call.

Once the race passed our initial location, we were redeployed by Control to our next position at Albert quay.  At approximately 11:30, we received a call from an on duty member of An Garda Siochana that a runner had fallen and hit his head. A few moments later our control dispatched us to the same location which was approximately 1 minute away.

We arrived to find an unconscious male lying on the ground, someone had put a jacket under his head, a bystander shouted “he’s not breathing”. We immediately checked his vitals, confirming he was not breathing.

We commenced CPR and just like we planned a defib, suction machine and jump bag were delivered by 1 one of the crew. We applied defib pads and within 8 seconds the defib had analyzed, shock advised and delivered.

We prepared a stretcher and with the patient transferred to our ambulance, and a Garda escort, we transported the patient to Cork University Hospital RESUS.  After a short break, we resumed our duties at the marathon until it finished, and we were stood down. Sometime later, we received news that the patient was talking to the doctors.  A great outcome.

We all agreed that it was down to the excellent training we get from our Instructors and Trainers that provided the tools for us to do our job when needed, the quick response of the Garda who alerted us and the speed of the call from our control. We know that, in a similar situation, all of our colleagues would have done the same but on the 5th June 2022 it was our turn. 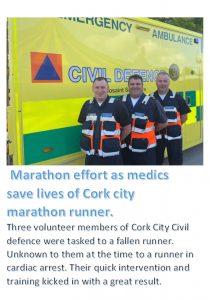