Over the past two weekends Roscommon Civil Defence was activated to assist with Cruisers which got into  difficulty while on the River Shannon.  Boat crews responded on both weekends as follows:

The first call was on Sunday morning 12th July when a cruiser had ran aground north of Rooskey. The Roscommon Civil Defence Officer co-ordinated the response and was also on scene – MRCS were contacted regularly and updated. A number of cruisers in the area had offered assistance but to no avail.  The cruiser had a party of four on board. For safety reasons two members on-board were removed to Kilglass Pier and transported to a Marina in Tarmonbarry. The other two occupants stayed on board and contact was made throughout the evening in the event that the cruiser’s hull may have been damaged and the possibility of the cruiser taking on water. On Monday morning a larger boat was able to assist in the operation and remove the cruiser.

A second call was received last Saturday evening  18th July to assist another cruiser in difficulty south of Rooskey in the direction of Newtown Forbes.  A number of calls were received about this incident and both Leitrim and Roscommon Civil Defence Officers along with lock keepers were involved.  The first task in this operation was to access the area as the locks were closed for the evening and it took our boat crew longer to launch at a suitable area. As a consequence it was after 9 pm before they reached the cruiser. Two persons were on board and the cruiser was made safe as it was badly caught.  On Sunday morning the lock keepers were able to allow extra water down river and along with another cruiser the boat was released and was back on the water.

Both boat owners were very appreciative of the response and assistance offered by Civil Defence.

Those that traverse the Shannon waterways have never seen so many boats on the water and we urge those less experienced to try and travel in groups or follow another cruiser in the area and follow the marking buoys that navigate your channel. Listen carefully to weather reports and don’t try to overdo your journey.  Always make sure to have lifejackets for your crew and please wear them , you should also have  the Emergency numbers  to hand that you might require, if in trouble dial 999 or 112 for the Coastguard . You also should be familiar of the times of the locks and bridges and always have one charged mobile phone for emergencies. We hope all those have a safe and enjoyable time on the River Shannon this summer. 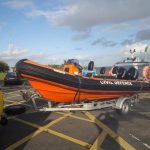 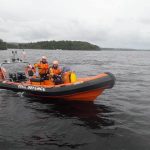 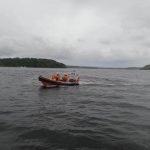