New jeep to support the work of Wexford Civil Defence

Minister for Defence Paul Kehoe, T.D. was at Wexford County Council Headquarters on Friday last 11 October where he presented the keys of a brand new jeep to Wexford Civil Defence.  The €34,000 4 x wheel drive Ford Ranger Crew-Cab was specifically selected for its capacity to deal with the often challenging conditions faced by Civil Defence crews as they assist in the response to national emergencies and severe weather events.

The jeep is part of a major upgrade of the national Civil Defence fleet which has seen the provision of 16 such jeeps to Civil Defence crews in Cavan, Clare, Cork West, Donegal, Dublin, Galway, Kerry, Kilkenny, Limerick, Louth, Mayo, Meath, Monaghan, Offaly, Sligo and Wexford. The funding was provided by a €500,000 allocation from the Government’s Dormant Accounts fund.

The business case for the vehicle upgrade made to the Department of Community and Rural Development was based on the fact that many of the activities carried out by Civil Defence during the recent severe weather events took place in rural, isolated areas and/or in disadvantaged areas of the large urban centres, with prioritisation of allocation of new vehicles focused on local authorities covering these areas.

During Storm Ophelia in October 2017 and Storm Emma in March 2018, the Wexford Civil Defence fleet of four-wheel drive vehicles was utilised in carrying out a variety of tasks, such as assisting local authorities, the HSE and the National Ambulance Service and An Garda Síochána.. During the highly adverse weather conditions of Storm Emma, Civil Defence volunteers assisted dozens of vulnerable people throughout the county who found themselves snowed in. They were also involved in transporting patients and carers, evacuating people from their homes and delivering meals.

Wexford Civil Defence Officer Peter O’Connor welcomed the allocation of the new jeep to Wexford. “This much-needed 4-wheel drive jeep will be a highly valuable resource for Wexford Civil Defence in times of emergency as our crews work to keep people safe” said Peter. “Its provision is also an important acknowledgement of the work of our volunteers and their ongoing commitment to Civil Defence” he added.

Wexford County Council Civil Defence currently has 136 active Volunteers, of which 34 were recruited in 2019, while a new unit was also established in Enniscorthy in 2019. The Wexford Civil Defence vehicle fleet consists of eight 4x4s, four ambulances – one based in each of the four main towns – together with two minibuses and one Incident Control Vehicle.

In 2018 Wexford Civil Defence provided assistance to more than 100 community events throughout County Wexford, while the work of its volunteer crews during Wexford’s coordinated response to Storm Emma and Storm Ophelia earlier that year has been locally and nationally recognised and applauded.

Civil Defence volunteers are highly trained and provide valuable assistance to the Principal Response Agencies (local authorities, an Garda Siochána, HSE and Ambulance Services) during times of emergency. New volunteers are always welcome. If you would like to consider joining Wexford Civil Defence, contact cdo@wexfordcoco.ie for more information. 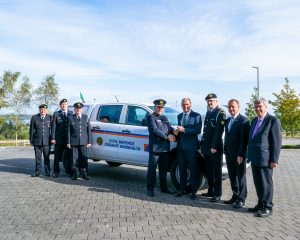