Hundreds of people from the North West scaled Donegal’s highest peak for the ‘Climb Errigal Together’ event.

All proceeds from the challenge are going to the Irish Motor Neurone Disease Association and Pieta House. The climb in the heart of the Donegal gaeltacht, was one of 150 that had been organised nationally as part of “Climb with Charlie” – an initiative established by former RTE reporter, Charlie Bird, who was diagnosed with Motor Neurone Disease six months ago. Mr Bird subsequently announced on the Late Late Show that he was going to climb Croagh Patrick with family and friends to raise funds for the two aforementioned charities on 2nd April.

To coincide with this, the local event, lead by Cllr.Ciaran Brogan, Donegal County Council, one of the main organizers and Mr. Eamon McGee, Donegal Motor Club who was appointed as the lead coordinator for the event, was launched in Gaoth Dobhair’s An Chúirt Hotel in February. The event was supported by Civil Defence, An Garda Siochana, local bus operators, sports clubs and the Dunlewey Centre.

On the day, Civil Defence provided radio communications, medical cover, and mountain rescue for the climbers, whilst some of the more enthusiastic members along with the Civil Defence Officer, ventured the climb in aid of the cause. Everyone who took part in the challenge was presented with a commemorative medal sponsored by Michael Murphy Sports. 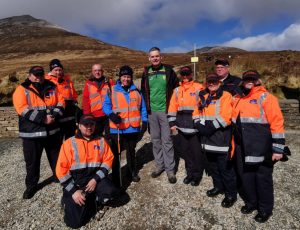